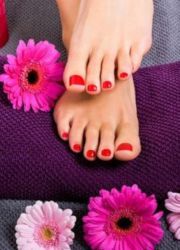 Manicure and pedicure are two essential components of a good mood for any woman. A trifle, it would seem, but with legs and arms put in order, going out into the street is more pleasant than usual. Shellac — the ability to maintain the beauty of manicure and pedicure for up to three weeks. We will discuss the benefits of a Shellac pedicure below.

With the advent of Shellac, many problems have disappeared in the lives of women. Now, having done a pedicure, you can forget about the constant overcoating of nails with varnish. Shellac stays on the nails for a long time, does not peel off, does not peel off (well, except in extreme cases, and then most often with mechanical damage). Among other things, gel polish — the common name for Shellac — is completely harmless.

Shellac pedicure technology is more complicated than the traditional procedure, but many masters have already been able to comprehend it. The main difficulty is that, unlike conventional varnish, Shellac must be baked in a special lamp (the one in which nails are baked during extension). But today such a device is not a problem, it is in all salons.

How to do a shellac pedicure?

If you have grown your nails at least once or even been present at the same time, then the Shellac coating procedure will not be surprising. Everything happens according to the same scheme:

A huge variety of materials allows you to embody any designs on nails. Shellac can be successfully combined with rhinestones and other decorative elements. It looks great on nails as a monochromatic gel polish, as well as a popular and practical jacket. In general, it all depends on the imagination of the client and the master.

Although the procedure for coating nails with gel polish is quite simple, it requires a whole arsenal of materials and devices (brushes, pushers, a lamp, gels, fixatives). Therefore, of course, it is rather problematic to make a cool Shellac pedicure at home. But nothing is impossible!