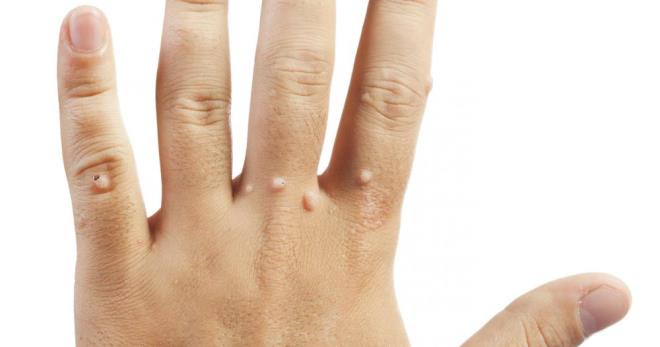 Warts on the hands, the causes and treatment of which have been studied quite well, are a serious cosmetic defect. They not only look unpleasant, but can also interfere with everyday life. Tubercles can occur throughout the body, but statistics show that the limbs suffer from them in most cases.

Warts on the hands — causes

The disease affects the skin and mucous membranes. Warts on the hands, their causes and treatment, medicine is actively studying. The researchers managed to find out that the disease appears due to the human papillomavirus. The latter lives in almost every organism, but manifests itself only when the immune system is weakened and cannot give a worthy rebuff to the pathogenic microorganism.

Why do warts appear on the hands? Mainly because the limbs are the most injured and more often than other parts of the body come into contact with potential carriers of the virus. HPV is transmitted like this:

What does a wart look like on a hand?

As a rule, warts on the hands, the causes and treatment of which are described in the article, look like dense formations that slightly rise above the surface of the epidermis. The diameter of the tubercles varies from 0.1 to 1 cm. The color of the formations differs little from the shade of healthy skin. Bulges are also single, but in most cases they are formed in groups.

It looks like a hardened hard bubble. Its height does not exceed 0.5 cm. The tubercles are painted grayish or brown. A wart on the finger and back of the hand may form. In most cases, ordinary or as they are also called — vulgar — formations are found in young people. Near the main — maternal — bubble, «children» often appear.

These spots are round or irregular in shape. In addition to the back of the hands, they affect the face, chest area, shoulders. Flat warts on the hands are painted in a light brown color, but as a rule, the shade of the tubercles does not differ from the healthy epidermis. The formations slightly rise above the skin — only a couple of millimeters and sometimes cause discomfort.

It is considered a variety of ordinary formations. Palmar-plantar warts appear on the hands and feet. Outwardly, they look like small spikes rising above the skin. Their structure is dense. The spikes can be painful and almost always cause discomfort. When the top layer is exfoliated from the wart, black dots are visible on the surface.

These warts on the hands have different causes and treatments than other types. The fact is that such formations are seborrheic keratotic growths. In the initial stages, keratomas look like spots, which eventually transform into growths with seborrheic scales on the surface. When dry particles fall off, papillary growths remain on the skin. Like other types of hand warts, senile keratomas are benign.

Warts on the hands — treatment at home

Knowing the causes of warts on the hands, and its treatment can be discussed. Therapy required is not the most difficult, but it is still not recommended to prescribe medications on your own. Before getting rid of warts, you need to consult with a specialist. The doctor will select the most suitable therapeutic regimens. Otherwise, you may run into a number of problems:

How can a doctor help get rid of warts on the hands? There are several main types of drugs that effectively cope with the virus and the consequences of its activity:

A wart on the finger can also disappear under the influence of alternative medicine. Onions and garlic work well. To turn foods into medicines, they need to be marinated in vinegar for a couple of hours, and then tied to a sore spot. If you don’t feel like walking with a plate of onion or garlic, you can simply treat the tubercle with juice, which is most actively released in the place of a fresh cut. Raw potatoes can be used as a good alternative to these fragrant medicines.

You can choose a good ointment for warts on your hands from the following list:

This procedure can be carried out at home using special solutions. A good remedy for warts can be found in this list of drugs:

How to quickly get rid of warts on the hands?

Dermatologists offer several ways to deal with growths. Here’s how to remove a wart quickly and effectively:

Although surgery is an effective method of treatment, of all the methods described above, it is considered the least popular. The fact is that the procedure for removing the wart turns out to be painful — that’s why it is carried out under local anesthesia — and after it the patient has to endure a long rehabilitation period. In addition, the infection may penetrate into the postoperative wound with a greater probability.

Removal of warts with liquid nitrogen

A modern technique that allows you to get rid of formations due to cryogenic technologies. Removing warts with nitrogen has many benefits. The main one is the possibility of precise impact. Nitrogen enters only diseased tissues, while healthy epidermis remains intact. This procedure is assigned when:

A painless procedure that is very popular today. Before removing the wart, no preparatory measures are required. To remove a small formation, a single treatment is enough. In rare cases, a course of treatment is prescribed. Since the laser beam does not touch the surface of the skin, rehabilitation after the procedure is not required.