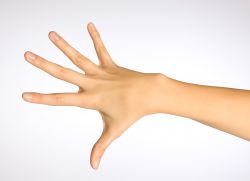 Well-visible veins on male hands look quite attractive. But the female hands of many women, sinewy with a visible vascular network, make them tense up. It turns out that there are quite a few reasons why veins on the hands of ladies can protrude. Some of them are completely harmless. Of course, it also happens that a protruding vein, which, among other things, also hurts, is a symptom of a serious illness.

Why do veins protrude on the arms?

On the way to the tissues and organs, the blood overcomes a considerable distance separated by valves. From one obstacle to another, portions of blood move with each heartbeat. If the vessels are sick, they become thinner and less elastic. Because of this, the valves lose the ability to open and close normally. And accordingly, the blood flow through the veins is disturbed.

Reasons why the veins on the arms protrude strongly

The formation of a venous network on the body is most often associated with varicose veins. In most cases, the disease affects the lower extremities, but from time to time specialists have to diagnose vasodilation in other parts of the body. In many patients, veins in the arms may protrude due to aneurysms, atherosclerosis, or other diseases that develop in parallel with varicose veins.

Violation of blood flow in the vessels is a rather dangerous phenomenon. The fact is that the protruding veins are only the surface part of the iceberg. Without paying attention to the problem, you may encounter such consequences as thrombosis or thrombophlebitis.

There are other reasons too: