A fungus on the fingers is a skin lesion caused by pathogenic organisms. This disease is also called mycosis. According to the nature of the pathogen, it is divided into two groups: excited by yeast fungi of the genus Candida or dermatophyte fungi.

Symptoms of a fungus on the fingers

When the skin is infected with a fungus on the fingers, small cracks, dryness and thickening of the skin appear in the interdigital folds. On the palms, minuscule-purple lesions of oval outlines may appear. The edges of such foci of inflammation consist of vesicles, crusts, scales and nodules.

Symptoms of a fungus on the fingers also include:

White spots and stripes appear on the patient’s nails, and yellow stains appear in the depth of the plate. The color of the nail plates often changes to yellow, grey, black, greenish or brown. In advanced cases, small and large purulent non-healing ulcers form on the skin.

Treatment of fungus on the fingers

If you contact a dermatologist when symptoms of a fungus appear on your fingers and ask him how to treat this disease, you will most likely be prescribed special antifungal ointments or creams. This is due to the fact that drugs that can be used to act locally on the lesion penetrate the membrane of the fungus, affect its structure, and it quickly dies. They quickly eliminate all discomfort and visual manifestations of the disease.

The most effective ointments for fungus on the fingers are:

It is not recommended to use these drugs without consulting a doctor, since many of them are contraindicated in people with kidney failure.

In severe cases, the patient may need hardware cleaning of the nail. During this procedure, the upper affected layer is ground off, which ensures better access of antifungal drugs to the affected area.

If a fungus occurs on the thumb or any other finger, pulse therapy can also be used for treatment. According to this method, any ointments and creams are used not constantly, but in short courses. This technique allows the body to cope with the disease without the appearance of side effects, and in terms of effectiveness it is not inferior to the usual long-term use of medicines.

Treatment of fungus on the fingers of folk methods

For the treatment of fungus on the fingers, you can use folk remedies. In a short period of time, you can get rid of all the symptoms of this disease if you put a piece of cotton wool with Novocain on the sore spot daily for 7 days at night.

Well proven in the treatment of such a problem and ointment with vinegar.

A special cream with butter and garlic can help get rid of the fungus. 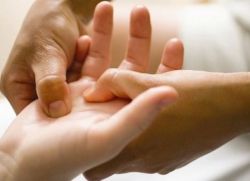 Combine garlic and butter. Every day, several times a day, apply the resulting ointment to the affected nail. This procedure can be repeated until the fungus disappears completely.