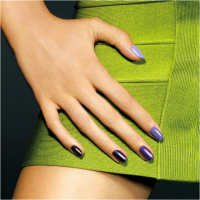 Over the past few fashion seasons, the so-called ombre manicure has become very popular, which is ideal for creating both stylish everyday and bright spectacular looks. To make an ombre manicure, you need to apply several shades of varnish on your nails, blurring the border between them and thus creating a smooth gradient.

Types of manicure with ombre effect

A very beautiful ombre manicure can be divided into four different types:

How to do an ombre manicure?

The easiest way to do a manicure in the fourth type of ombre style at home, because for this you just need to paint each nail with different shades of varnish and not confuse their sequence, moving from the lightest to the darkest.

The ombre manicure technique of the first and second types involves the use of some smooth, uniform surface for mixing varnish of two shades, “wetting” the resulting puddle with an ordinary sponge or washcloth, and then applying a smeared pattern to the nail, previously painted with base shade varnish.

The third version of the ombre manicure at home is done in exactly the same way, but few people succeed in doing it carefully, since the procedure is quite complicated and tedious.

One of the most elegant ombre manicure options is a French manicure using delicate “powdery” shades. The classic version of the jacket looks best using the ombre technique, when the nail of a pale pink or beige-pink shade smoothly flows into a white tip.

To make an ombre French manicure, you first need to get your hand on creating a nail design with a smooth transition of unpretentious shades of medium intensity. If such a manicure is decorated with rhinestones, small flowers and other similar elements, then it is perfect for a wedding or any other festive event.

To create a luxurious holiday manicure with an ombre effect, you can cover your nails with a varnish with small sparkles on top. 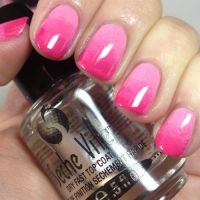 or apply a similar varnish instead of the second shade, smoothly smoothing the transition to the edge of the nail.

The varnish with multi-colored iridescent sparkles looks very bright and unusual, applied using the ombre technique on the nail, covered with a transparent varnish or a varnish of light milky shades.

For young girls, a cheerful “rainbow” version of an ombre manicure is perfect, when all the colors of the rainbow flow from one to another on each nail.

When choosing shades of varnish to create an ombre manicure, you should avoid too bright, dark or iridescent tones, preferring more delicate and light shades, on which the gradient is clearly visible.