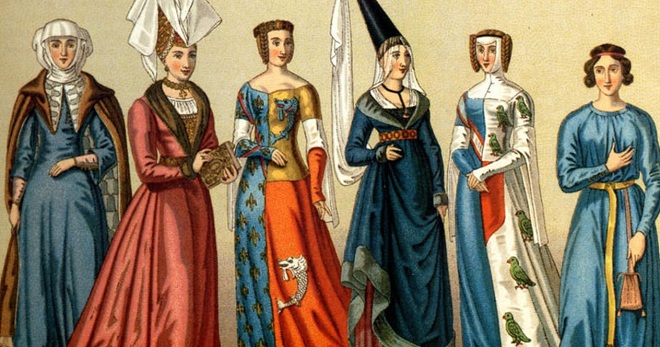 The question of what is fashion occupies many women. We all know how fast trends in shoes, clothes and manicure change, and we try to follow them. However, few of the beautiful ladies understand what this concept includes and where it originates from.

It is not at all easy to answer the question of how the history of fashion began. Wardrobe items, in which all representatives of a particular civilization walked, existed for a very long time, however, at that time people did not think about how to dress beautifully and attractively. For them, wearing clothes was just a way to keep warm and hide intimate places from prying eyes. Any novelties or foreign outfits were perceived «with hostility», so there was no desire to change or transform something. 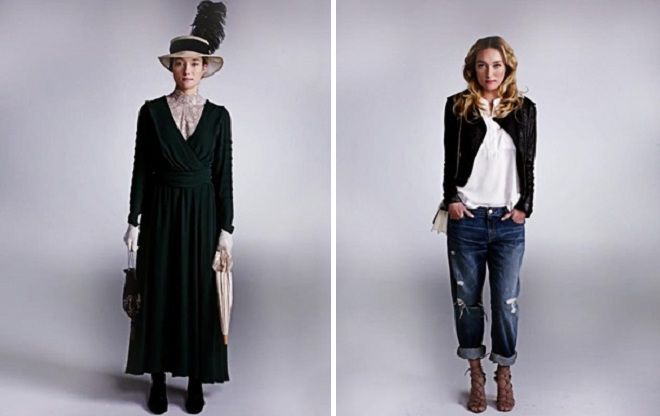 The history of fashion

Experts believe that the history of fashion and style began only in the XIV century. The capital of France, Paris, is called the birthplace of these concepts, although residents of other European countries were also instantly carried away by them. The fair sex began to show imagination and tried their best to stand out from the crowd, creating for themselves extravagant headdresses or original jewelry. The most striking representative of that time was the “hat with horns”, which is a fabric structure to which cones are attached in a special way.

In the future, trends in women’s clothing began to change with each new season. So, with the onset of cold weather, beautiful ladies dressed in velvet, and in the summer — in products made of natural silk. Gradually, the cut of wardrobe items began to change — some models became a little more frank than the previous ones. Techniques known today have appeared that make the image of a fashionista charming and seductive.

Although the history of women’s fashion originates in France, its main trendsetter during the first two centuries of its formation was Italy, or rather, Venice. Venetian beauties set the tone for dresses and hairstyles, introduce false hair and chignons into the trend, and pay special attention to accessories. So, already in the 15th century, almost all young women wear the thinnest neckerchiefs and velvet bedspreads framing their faces. 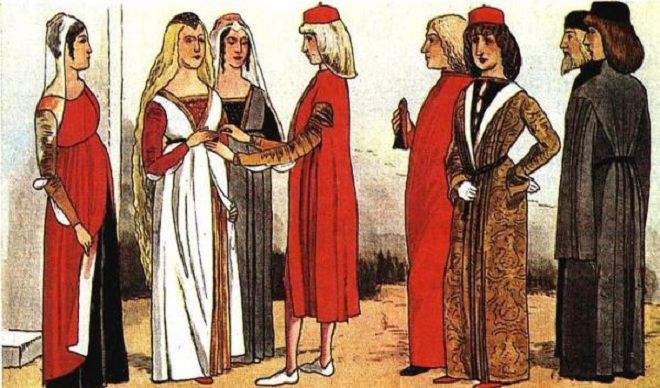 A little later, from the middle of the 16th century, Spain became the trendsetter. Prudish Spaniards promote closed and chaste outfits — dresses with a deaf collar, long sleeves and high starched collars. The skirts are predominantly puffy and long, there was no talk of any cuts or asymmetrical hemlines revealing bare legs at that time. Meanwhile, young ladies have a new way of seducing men — all kinds of fragrances have come into fashion, giving the image of their owner a mystery and sexuality. 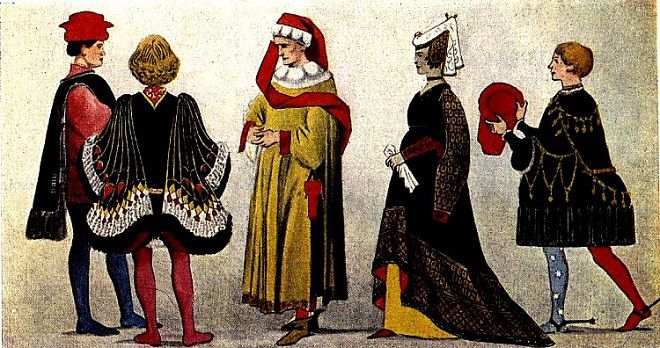 Finally, in the 17th century, the country responsible for its appearance, France, began to dictate fashion. Parisians were considered universally recognized icons of style for a very long time — more than two hundred years. During this time, trends have changed a huge number of times, but women all over the world completely obeyed the opinion of Parisians and copied their outfits with pleasure, adding practically nothing of their own.

Since the 20th century, states have ceased to be legislators of current trends. Their place was taken by fashion houses that managed to gain wide popularity. Branded brands began to appear around the world, some of which managed to exist for only a few years, while others, on the contrary, lingered on the fashion Olympus for a long time. To date, well-known stylists-trendsetters are dispersed across all continents, but most fashionistas still focus on French and Italian couturiers. 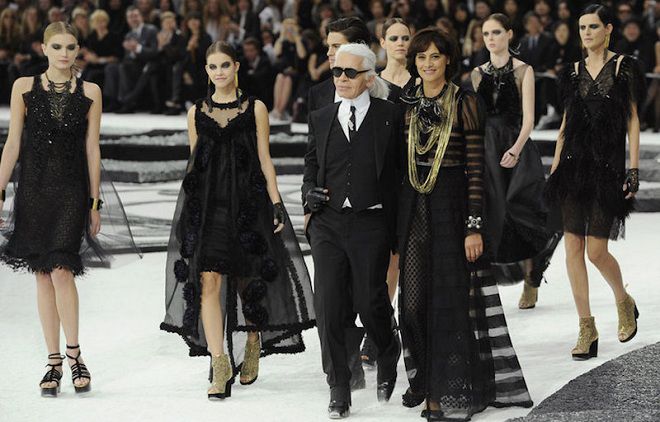 What is fashion and style?

Thinking about what fashion is, some women confuse this concept with style. In fact, fashion is understood as the temporary dominance of one style or another over others. Almost always, this term refers only to a certain area, such as a district, city or state, but not to the whole world as a whole. Modern women’s fashion extends not only to clothes and shoes, but also makeup, manicure, hairstyles, fragrances, accessories and other areas. 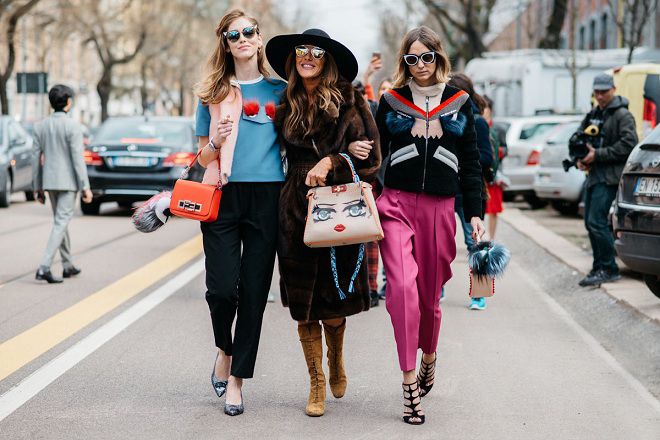 What is high fashion?

The term originated in Paris in the 19th century. A special meaning is already being invested in it — we are not talking about the production of mass clothing, which is available to most of the fair sex all over the world, but about the manufacture of luxury wardrobe items, each of which is not at all cheap.

Currently, when answering the question of what haute couture is in fashion, the products of such gurus as Chanel Haute Couture, Couture Atelier Versace, Gautier Paris and others come to mind. The products of these manufacturers are distinguished by the highest price, the complexity of manufacturing, the unusually high quality of workmanship, the use of precious stones and other expensive materials in their work, and so on.

With the advent of such brands, women and girls learned what a fashion show is, and began to attend such events with pleasure. At each show, more and more people began to appear, interested in current trends, popular trends and new products. After each fashion show, experts compare the demonstrated models and determine which outfits should be preferred in a particular season. 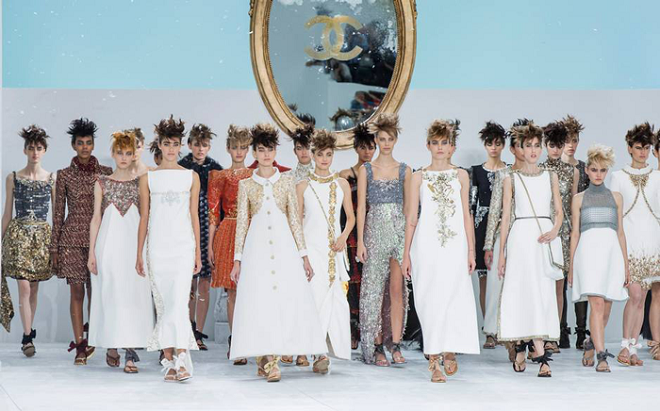 What is a fashion trend?

When discussing what modern fashion is, it is impossible not to single out the concept of “trend”. It refers to the current trend, which at the moment should be given maximum attention. As a rule, no trend lingers at the top of the fashion Olympus for too long — in most cases, with the start of the new season, all such trends recede into the background, and new trends take their place. Not all women know what macro trends are in fashion. The macrotrend subordinates to itself all the current trends in the season and correlates with a certain era, for example, the 70s, 80s or zero. 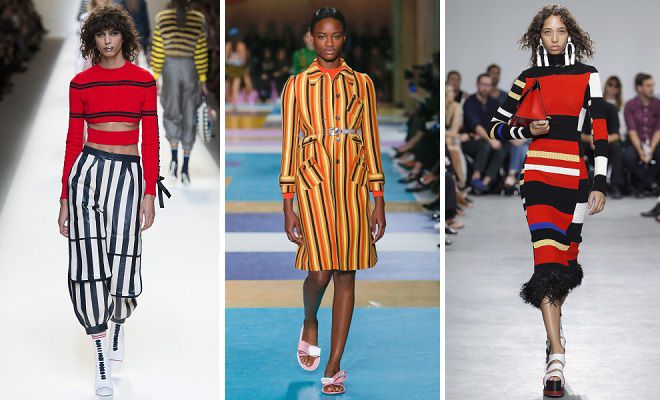 What is a capsule collection in fashion?

To promote and sell their products, stylists and designers around the world are ready for a lot. Since the competition in this area is unusually high, brand representatives have to go to different tricks. Often, fashion brands create a so-called capsule collection — a line of products that are developed in collaboration with a well-known designer or world celebrity. Such models, as a rule, sell very well and attract increased attention of buyers to other models of the brand. 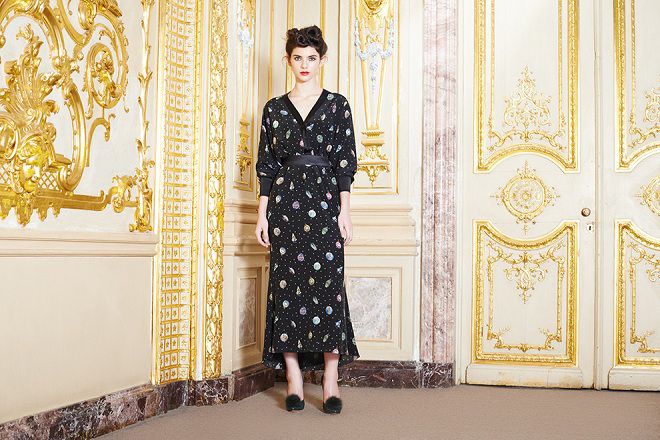 What is a must have in fashion?

In the fashion world, there are many different concepts that cause misunderstanding and questions among women. Although most of the fair sex is aware of what it means to follow fashion, and tries with all their might to please this capricious lady, not all young ladies understand why they should wear this or that in a particular season.

In fact, many trends appear as a result of the craze of fashionistas for a certain item, while one of them — a must-have — is announced by fashion industry experts. This concept has a special meaning — it denotes the most important trend or «squeak» for a particular season. In some cases, the must-have lasts for several years — there are no restrictions for this. 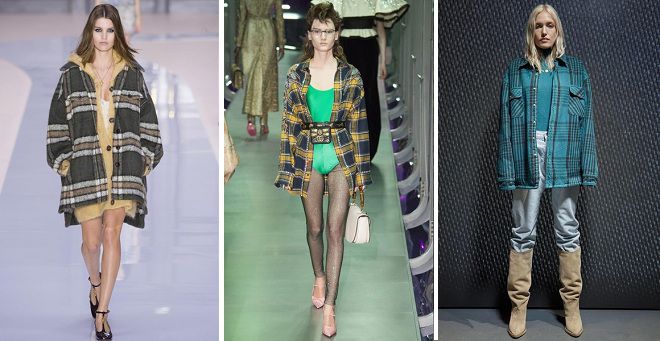 What is a bow in fashion?

Another question that can be heard from beautiful ladies is “What are bows in fashion?”. This word is very often found on the pages of fashion magazines or comes from the mouths of reviewers of various television programs. In fact, the bow is a synonym for the word «image», however, this is not exactly the same thing. Absolutely all the details are important for the formation of the bow — every element of clothing, shoes, accessories, hairstyle, makeup, and so on. The word look denotes how a person looks at a particular moment, while the concept of «image» can extend over a long period of time. 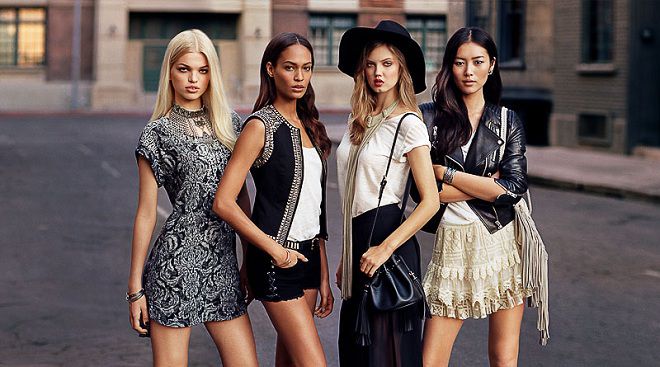 The most famous fashion houses

There are a huge number of fashion brands in the world, each of which has its fans and ill-wishers. Among all this diversity, there are both little-known brands and real gurus whose names are heard all over the world. Fashion shows of the most famous and influential brands included in the TOP gather designers, experts, world celebrities, representatives of the richest families in the world and many others. Currently, the rating of brands is headed by the following names: 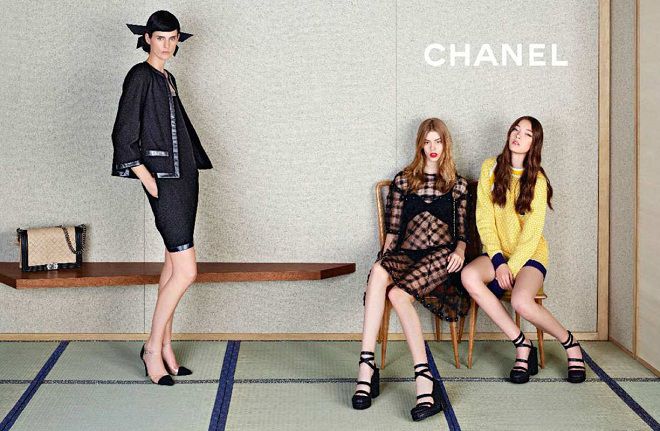 What is ugly fashion?

Some women, thinking about what fashion in clothes is, say that they will never follow it and will dress the way they like. Indeed, many current trends look strange, original and wonderful. So, on the catwalks you can see shoes that are associated with orthopedic diseases and disabilities, trousers and jeans with an unusually high waist that makes the figure ugly and disproportionate, dresses “from rags” and much more.

For most girls who see this for the first time, the question arises, what is ugly fashion, and why is it needed. After all, not a single woman of fashion, striving to look bright, beautiful and attractive, will put on something that does not decorate her, but, on the contrary, disfigures her. Meanwhile, the task of such things is to make the image unusual and attract the attention of others to its owner. They, without any doubt, cope with this, and therefore they are gaining immense popularity among young ladies who love to shock the public. 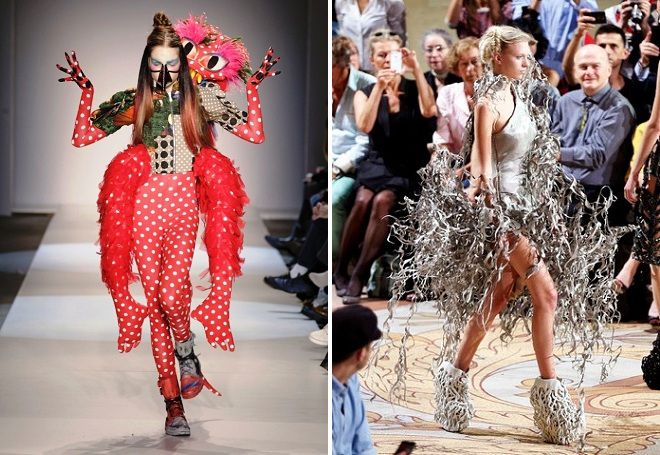 Interesting facts from the history of fashion

There are many interesting facts in the history of fashion and style, for example: 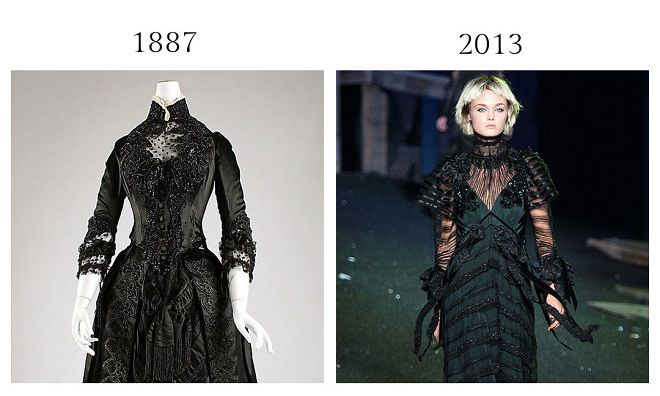 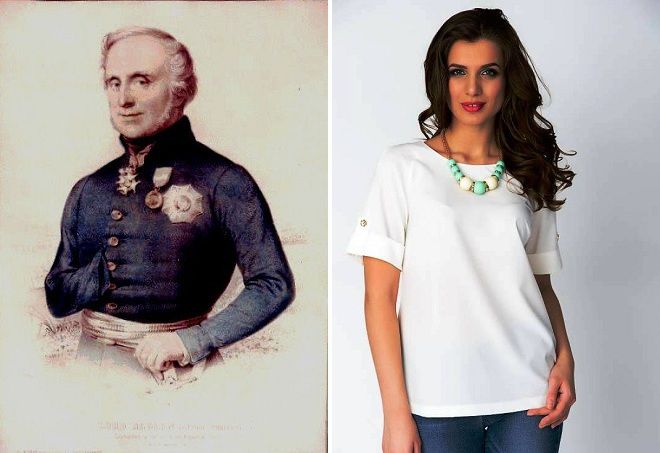 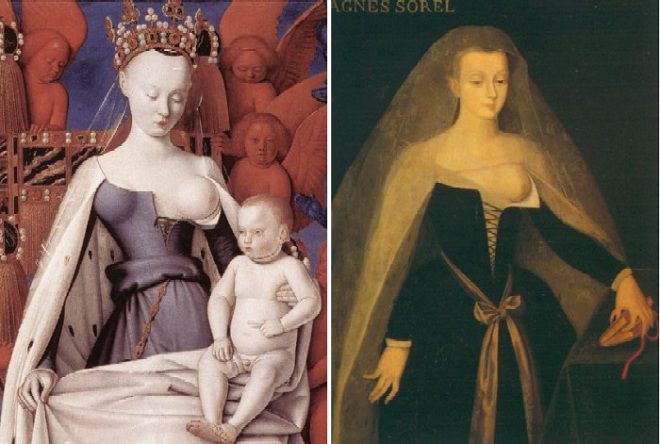