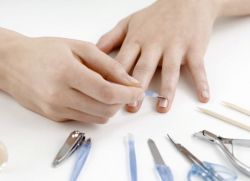 Previously, the only way to make nails neat and well-groomed was a cut manicure. Now there are not only new tools and care products, but also safer options for how to remove the cuticle. Every year they become more popular, and a significant number of women already prefer «European» or dry manicure.

How and why to clean the cuticle?

The considered layer of thin skin, growing at the base of the nail plates, is intended to protect them from infection and damage.

In fact, it is not necessary to remove the cuticle at all, given its functions. However, an excessive amount of this skin can provoke the formation of burrs, deform the nail and slow down its growth. In addition, noticeable cuticles look unaesthetic and spoil the overall impression of a manicure.

The only compromise in this situation is not complete, but partial removal of the skin, so that it looks neat and well-groomed, and at the same time continues to protect the nail.

How to remove the cuticle machine?

Having a device for hardware manicure, it is extremely easy to get rid of the skin that has grown on the nail plates. It is enough to have only 2 nozzles — medium and small diameter. The first will allow you to remove the free edge of the cuticle, and the second will provide a fine treatment of the nail fold.

It is not necessary to steam your fingers before a hardware manicure, it is enough just to disinfect them.

How to remove cuticles from nails with trimmed manicure?

Perfectionists still prefer only the complete removal of the cuticles, as cutting the skin allows you to quickly achieve the perfect result and slightly lengthen the nail plate.

For the manicure in question, you must first push back and lift the cuticles with a special spatula, and then cut them off with sharp scissors or nippers along the edge of the nail fold.

Before starting work, you will need not only disinfection, but also steaming your fingers to soften 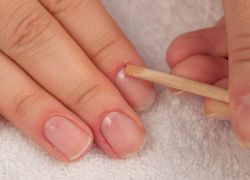 How to remove the cuticle without circumcision?

European manicure is considered the most gentle and safe nail care option. Its implementation is carried out in 2 stages. First, a special acidic agent is applied to the cuticle, which softens it and partially dissolves it. After that, the free edge of the skin is pushed back with an orange stick.

As in the case of hardware manicure, the procedure requires only disinfection.