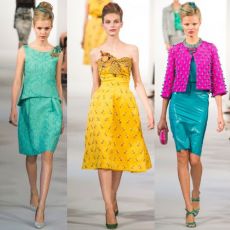 Our dear ladies, literally in a month the long-awaited spring will come. The time of freshness and vivacity, when you can finally say goodbye to the burdensome load of hats, scarves, coats and step into such a pleasant time for each of us — spring. So let’s talk about the fashionable colors of spring-summer 2013, which will accompany us for the next six months. What does the upcoming season have in store for us?

So, the color scheme of spring-summer 2013 is unique, it will not have the monotony that was present in previous seasons. It will surprise us with bright geometric patterns and rich shades, it will give us the opportunity to combine seemingly completely incompatible things.

emerald color will become the most fashionable color of the season. At least, this is what the world experts in the field of coloring — Pantone think. This shade of green has several special properties that are associated with emotional perception, which is apparently why emerald has been rightfully considered the color of luxury and chic from time immemorial, enhancing the feeling of well-being, harmony and balance.

Undoubtedly, one of the leading places in the new season will also go to orange color, which, like the sun, will give us all a charge of vivacity and energy. You can also give preference to bright orange or its calmer shades — beige and peach.

In second place in popularity is the so-called «classic» — white and black colors. They, like a king and queen, reign in the collections of fashion houses of recent seasons. And this, of course, pleases fashionistas who prefer a more traditional style of clothing. White and black blouses, trousers, shirts — all of them will certainly be at the peak of popularity this coming spring. No less fashionable will be the blue color with its huge variety of shades. This color can also be safely called a classic. He burst into fashion unexpectedly, and if you have not had time to open the wardrobe doors for him, then in the spring you will have the opportunity to catch up. Buy yourself a couple of things in blue tones, and you will definitely not go unnoticed.

Yellow, which climbed to the top last year, will still remain on top, although its popularity is noticeably fading. This is probably why in the upcoming season he is going to surprise us with brighter and more contrasting combinations compared to what we have seen before.

In last place in this ranking will be purple and hot pink shades. They will also be popular in the fashion world. They will not be called the leaders of fashionable colors in clothes in 2013, but, nevertheless, their popularity cannot be underestimated.

All of the above applies to the use of trendy colors in clothes, but what about manicures and makeup, you ask? Take your time, our dear fashionistas, everything is in order. So let’s start with the manicure.

Trendy colors of manicure and makeup 2013

The variety and saturation of colors in manicure in the new season will be significantly reduced, perhaps because bright and colorful clothes will come to the fore. And if the manicure also turns out to be bright, then you must admit that this is already too much.

For an evening manicure, minimalism is ideal, which involves the presence of only one color. An alternative to such monochrome can be the use of additional, contrasting shades, but only on one finger of each hand. A successful combination of a manicure with a dress or lipstick worn on you will also be important and fashionable.

As for make-up in general, in 2013 the use of colors will remain very active, but the colors themselves, like, say, eye shadow or blush, will be predominantly matte, muted tones.

The main shoe trend of the upcoming season will be the shine of gold. But don’t overdo it! Shoes or sandals should not be completely golden, it is enough that some part of the shoes is covered with an interesting metallic sheen — for example, the sole or heel.

Among colored shoes, blue and purple will be the most fashionable. But we must not forget that these colors focus on the fullness of the legs, so they should be chosen by owners of slender legs. The rest, however, also need not despair! Dark-colored shoes with a more “heavy” shape will also remain popular in 2013.

It seems that the trendy colors of spring-summer 2013 will really delight us with their brightness and variety, and yet the main thing is to know when to stop!