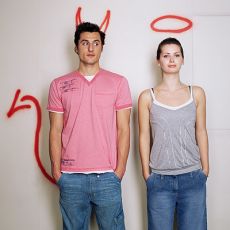 Oh, they don’t like bossy women, oh, they don’t like ladies’ whims! Why are men themselves ideal or something, do they have any negative qualities? There is, and not a little! So now we will all find out about the shortcomings of men, and let them just try to make claims to us about the chatter on the phone, we will have something to answer.

Disadvantages of men regarding their habits

One of the most important shortcomings of men is their slovenliness. This terrible habit of scattering socks or, even worse, forgetting to change them. Panic fear of daily ablutions and unwillingness to find a common language with a razor. Lack of understanding of the culture of speech about the rules of conduct at the table and so on and so forth. Ladies can name 1001 more habits of their beloved, which irritates them to the point of madness. But think, perhaps everything is not so scary, a man can be explained by the disgusting nature of some of his manners. And do we really need boys that are clean-shaven in all places, whose manicure is better than ours? We’ll start to go crazy with envy.

The disadvantages of guys regarding their behavior in society

Let’s look at the following typical negative qualities that every second guy suffers from.

Bad habits, bad upbringing, these are all things that you can try to fix or eventually find them not so terrible. But the negative qualities relating to the character of a man cannot be altered — who will break the personality — but they are impossible to endure. True, some ladies manage to endure this, but only if such shortcomings of men are outweighed and paid off by their own merits. So what are the flaws of men that make a woman want to run as far as possible?