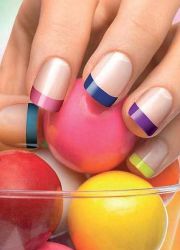 In summer, attention is paid to hands no less than to the face, because you can’t hide them under gloves, and a fashionable manicure becomes no less important detail of a woman’s image than makeup and hairstyle.

In the new spring-summer 2013 season, nail designs are predicted to be more rigorous than before. The new trend will be natural, oval shaped nails. Some forms of nails, such as long and square, are leaving the arena, along with flashy shades of varnish and conspicuous large decorations.

Trendy colors of the new season