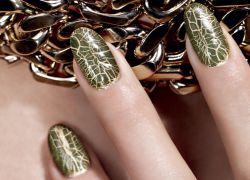 The effect of craquelure on nails has recently become quite popular, which is not surprising, because such a design looks very impressive and unusual. But, despite its popularity, for many this type of manicure remains unknown. Of course, this needs to be corrected. Let’s figure out what craquelure on nails is and how it is done, as well as what types of it exist.

Craquelure — what is it?

In general, the word «craquelure» is French and in translation means «cracks on the surface.» Initially, this term was used among artists and restorers, since, for example, when antique tables or paintings were restored, it was often necessary to resort to the craquelure technique to make the object look more dignified, but at the same time not lose the charm of antiquity. Now this term is also used in nail art. Craquelure effect varnish or, as it is otherwise called, python varnish adds originality to your manicure due to small and large cracks that appear as it dries.

How to make a manicure with a craquelure effect on nails?

Many beauty salons offer this type of manicure, but you can just as easily do it at home, since there are no particular difficulties in this process.

The first step is to cover the nails with regular varnish. To make the craquelure look more impressive, choose varnishes in contrasting shades. For example, the classic combination is white and black, but you can also opt for brighter shades. So, after you have painted your nails, you need to wait until the varnish is completely dry. And only after that you can apply craquelure varnish on top of it. In general, professionals advise applying this varnish in a thin layer, then it will look more prominent, but you can also experiment with the thickness of its layer as you like. Then wait for this polish to dry and cover your nails with a clear protective varnish. If this is not done, then the craquelure layer will peel off in a couple of days.

Please note that craquelure nail polish can be applied to the nail plate in different ways. That is, by running a brush along the nails vertically (as we usually do when applying varnish), diagonally, or in general with chaotic movements in different directions. In all these cases, craquelure cracks will look different.

So we figured out what craquelure is, and you can see several examples of manicure with this effect below in the gallery.