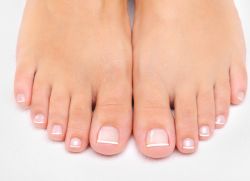 The ingrowth of the nail plates into the skin tissues causes unbearable pain, causes inflammation and provokes putrefactive processes. Previously, this problem was solved by a surgical method. Today, nail correction is performed using more modern technologies, does not require complete removal of the plate and is practically painless.

How is nail correction done?

The outdated methods of the procedure in question involved the excision of the ingrown nail under local anesthesia. The following methods are currently in use:

Depending on the degree of ingrowth, damage to soft tissues, a softer or more radical technology is selected (correction of an ingrown nail with a laser). Plates and staples make it possible to avoid the removal of processes, but the treatment is long, while minimally invasive surgery provides instant relief, although it involves a short period of rehabilitation.

The procedure is performed under local anesthesia and takes about 20 minutes. The essence of the operation is to accurately cut off a part of the nail plate with a laser beam, after which the growth zone is also processed. As a result, the ingrown pieces are removed and the nail is given a permanent shape (the irradiated areas never grow back).

It is worth noting that the laser exposure is bloodless, a sterile dressing is applied at the site of the operation for several hours. The recovery period takes up to 10 days, but the patient can return to a full life immediately after the procedure.

One of the disadvantages of the described technique is damage to the matrix of the horn process. Because of this, its appearance may become unaesthetic, and the shape and size will change forever.

Correction of an ingrown nail with plates and staples

The considered method involves non-surgical intervention and was developed on the basis of studies of the effect of braces. The mechanism of operation of the devices is that a metal bracket or plate (sometimes made of plastic) is attached to the surface of the nail. Its bend is chosen in such a way that the tension force lifts the ingrown edges, relieves pain. Over time, the shape of the nails acquires the desired shape without damaging the matrix.

Correction of nails at home

Non-severe stages of the described problem can be eliminated through a professional hardware manicure or pedicure, which you can do yourself or invite a master.

You will definitely need special tools for nail correction:

A clear advantage of the proposed technique is considered to be maximum aesthetics — the appearance of the nail plates after processing is absolutely natural. Moreover, the gel coating improves their structure. Nails become moisturized, strong, their color and surface even out.