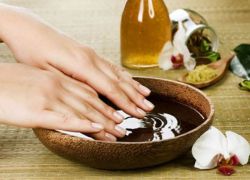 Clean well-groomed nails with shine always look impressive. And most importantly, what speaks of their health and attracts the attention of surrounding views is their whiteness. Such nails do not need to be masked under colored varnish, but on the contrary, they can be safely demonstrated, so to speak, in their raw form. It is not for nothing that French manicure is so common among the fairer sex.

Nails are one of the indicators of health, and if they turn yellow or darken, then this is an occasion to take a closer look at your body. As for the causes of yellow nails, here are the most common ones:

But still, do not despair if your nails are a little darker than we would like. There are many ways to whiten nails at home. Even our grandmothers know how to whiten yellow nails. Consider some very simple folk remedies.

Questions about how to whiten nails with lemon, you most likely will not arise. This is a simple procedure, for which you only need to squeeze the juice from a lemon, into which you then dip your nails for 15 minutes. After completing the procedure, you can rub a little vegetable oil or fat cream into your nails. You can use this method at least every day until you achieve the desired result.

It is also one of the most common ways. If you’re wondering how to whiten your nails with toothpaste, here are some practical tips. Apply the paste to your toothbrush and scrub your nails with it for a few minutes. You can do this daily.

For experiment and variety, you can use another method. Here you will need regular baking soda. Take half a teaspoon of soda and salt per glass, and stir well. Before you whiten your nails with soda, you can add lemon juice to the mixture, then the effect will be stronger.

In addition, you can whiten your nails with baking soda and peroxide. For this, the components are taken in proportions of one to two. One tablespoon of peroxide and two tablespoons of soda are mixed to form a creamy mass. It must be applied to the nails, and washed off after a few minutes.

Sometimes special baths are made to whiten nails. There are also several recipes for their preparation: 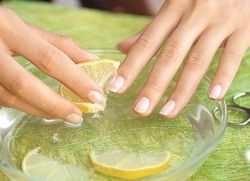 You can add a few drops of essential oils to the baths. It is also good to use some kind of moisturizer and emollient after each procedure, for example, cream, sunflower or olive oil.