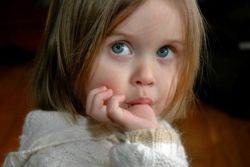 Oh, these 3 years — they just learned to cope with tantrums, how now think about how to wean a child from biting his nails. In a word, parents do not have to be bored.

But seriously, the children’s «manicure» problem is as old as the world, only the approach to solving it has changed these days. Previously, no one really thought about how to wean a 3-year-old child from biting his nails — they smeared their fingers with mustard a couple of times, and then how lucky. Now, being modern and adequate people, parents are trying to approach the solution of the problem more judiciously, and, importantly, to establish the causes of its occurrence.

How to wean a 3-year-old child from biting his nails: through the eyes of psychologists

Despite the seeming harmlessness, the habit of biting nails and barbs is an occasion for parents to show patience and vigilance. According to psychologists, the unaesthetic appearance of children’s fingers is the first signal of spiritual disharmony and inner experiences of a small person. Therefore, when wondering how to wean a child from biting his nails at 3 years old, the first thing you need to pay attention to is his psychological state.

It is not surprising that it is at the age of 3 years that adults notice a homemade manicure on the hands of their child, since this life period in crumbs is fraught with numerous experiences and difficulties. Judge for yourself: social adaptation in kindergarten, combined with complex processes of personality formation, as a result, fingers are pulled into the mouth like a magnet.

So, what to do first of all if a child bites his nails at 3 years old. For starters, you should ask the kid about his kindergarten life and new friends. Perhaps he is offended by peers, or the baby is afraid of public speaking. It would not be superfluous to ask the teacher if everything is in order and how the child behaves in the garden. There are cases when children, in this way, react to the remarks of educators. Pay attention to the mood in which he goes to the garden and returns home from it.

If everything is fine there, then it is worth observing the behavior of the baby at home. At what moments does he start biting his nails: while watching cartoons, playing games, after a quarrel with his parents, or maybe the baby is shy when people unfamiliar to him come to visit mom and dad. Also, bitten nails are often the result of family conflicts.

After establishing the cause, you need to move on to active actions aimed at eliminating it or changing the attitude of the crumbs to what is happening. For example, if:

Returning to the question of what to do if a child bites his nails at the age of 3, you can advise parents to smear their hands with some bitter and safe remedy, there is also a special nail polish.