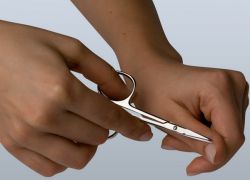 In order to have beautiful well-groomed nails, it is not necessary to visit a nail salon. At home, small nail scissors will help to give your hands an attractive, neat look.

Manicure scissors for nails and cuticles

A beautiful manicure is guaranteed only in the case of a properly selected tool for processing nails and cuticles. Manicure scissors are of three types:

However, not everyone knows that just buying nail scissors is not enough, they still need to be chosen correctly. Take a close look at your nails and cuticles, as well as the periungual area — it is also called lateral ridges.

Depending on the density and thickness of the cuticle, you need to select scissors with curved ends. For the thinnest cuticles, respectively, scissors are needed with a very thin web at the end — they are also called needle scissors. Not suitable for tight cuticles. Here you need nail scissors with thick blades. They will also help to cope with dry, dead side ridges.

Scissors are considered standard, the thickness of which is approximately one millimeter. They are used for cuticles with medium density and thickness.

It should be noted that relatively recently another type of manicure scissors for nails has appeared — safety scissors. Their peculiarity is that their tips are rounded. Due to this, the risk of injury is minimized, so they are most often used for cutting nails in young children. They can also cut hairs in the ears.

What are the best nail scissors?

When choosing nail scissors, you need to pay attention to the following criteria:

It is best to choose scissors made of medical steel, as they:

It is not difficult to check the sharpness of scissors. You need to take a thin plastic bag and try to cut it. If the scissors are sharp, the cut edges will be even. Otherwise, you should not buy such a product. Good quality scissors are more expensive, but it’s better not to save on this.

Among the brands that make nail scissors are the following: 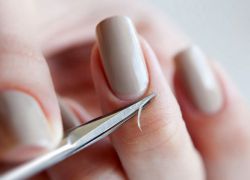 Another useful tip: it is better to buy nail scissors separately, and not in a set, as the quality of the tool is often “lame” there.

Relatively recently, manufacturers of manicure supplies began to produce goods for people with a predominance of the left hand as the leading one. Left-handed scissors are a mirror copy of the usual ones. The difference is in the position of the blades. If in ordinary scissors the right blade is located on top, which ensures the visibility of the cut line, then in left-handed scissors, on the contrary, the left blade is on top.