Warts are neoplasms of viral origin that can appear on any part of the body. One of the favorite places for localization of warts are the fingers, which can be explained by the fact that it is the hands that are more likely to come into contact with potential sources of infection.

Do warts need to be removed?

In most cases, these neoplasms are not dangerous and not painful, but still experts recommend getting rid of them. In addition to the aesthetic factor, there are several more serious reasons for this:

How to remove a wart on a finger?

It is worth noting that before looking for ways to get rid of a wart on a finger, you need to make sure that it is really a wart and not another type of neoplasm, for which it is recommended to consult a dermatologist. Having made an accurate diagnosis, the doctor may recommend one of the medical treatments for warts on the fingers, which include:

Treatment of warts on the fingers at home

You can quickly and inexpensively remove a wart on your finger at home using special topical products produced by the pharmaceutical industry. Here are the names of some drugs:

Treatment of warts on the fingers with folk remedies

Traditional medicine offers many methods of getting rid of warts, which are characterized by varying degrees of effectiveness. Here are the most effective recipes.

How to get rid of a wart on the finger with celandine?

In the warm season, warts can be removed using the celandine plant, which is a recognized remedy for suppressing the growth of abnormal cells. To do this, several times a day, lubricate the growth with yellow juice, which protrudes when the plant stem is broken. Treatment of a wart on the fingers with celandine should be continued continuously until it disappears completely (as a rule, this takes from two weeks to two to three months). 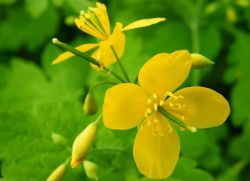 Chop the garlic and pour over the vinegar, cover the container with a lid and insist for two weeks in a dark place. The resulting solution is used for compresses on the affected area of ​​the skin, which should be done at least twice a day every day until the build-up is completely eliminated.

This method provides for the following: daily at night, apply a piece of banana skin to the wart (with the inside), securing it with tape. The treatment takes about a month.