It would seem that such a primitive object is a clerical gum, and it can be used to solve various problems.

Did you know that rubber bands were originally invented to hold securities together and attach prescriptions to medicine bottles. Now it is more often used to connect money in a pack, but in fact, its scope does not end there, as evidenced by the following life hacks.

1. Whole glasses after the dishwasher. 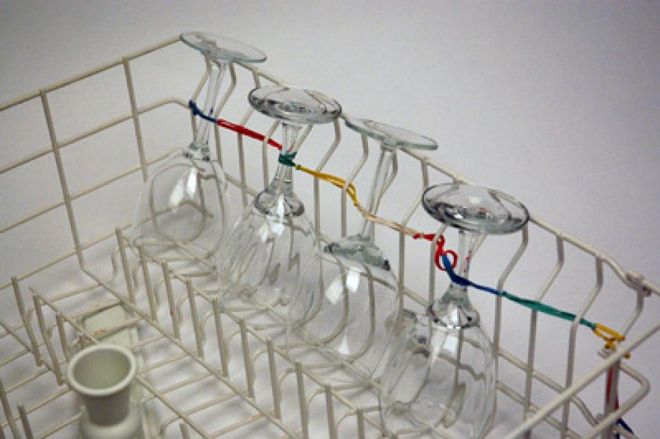 Loading the dishwasher, especially for the first time, many housewives are worried about the integrity of fragile glasses. There is a simple secret how to protect them from beating: with the help of rubber bands, fasten the legs to the grate. This method can also be used during drying by attaching glasses to the bottom of the grate. 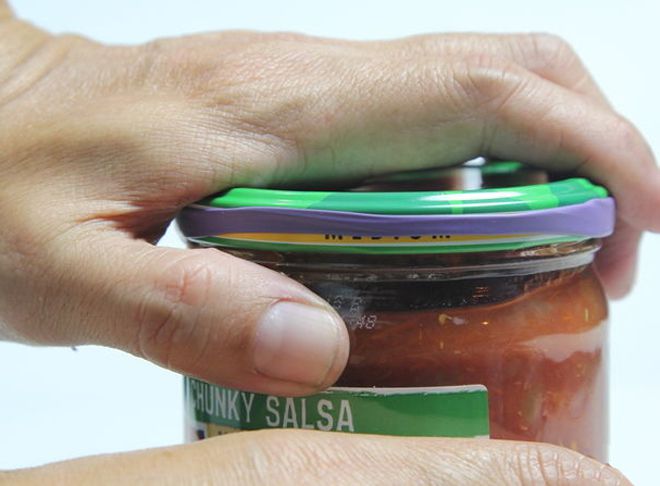 Do you like jam, pickles and other preparations that are rolled into jars, but often you have to suffer with a lid for a long time to get a treat? A solution has been found and, oddly enough, an ordinary stationery gum will help in this matter. It’s very simple — you need to wrap the edges of the lid with a rubber band and turn it.

3. Now the spoon will not sink. 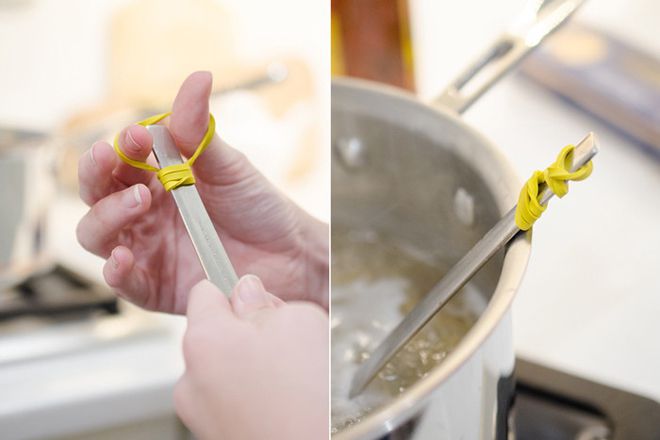 Usually at the most inopportune moment, a spoon left in a bowl during cooking will slip off and fall right into the contents. Ah-ah-ah-ah! Eliminate the need to get your hands dirty or redo the dish with the usual clerical gum, which must be tied at the edge of the spoon.

4. So that the coat hanger does not slip. 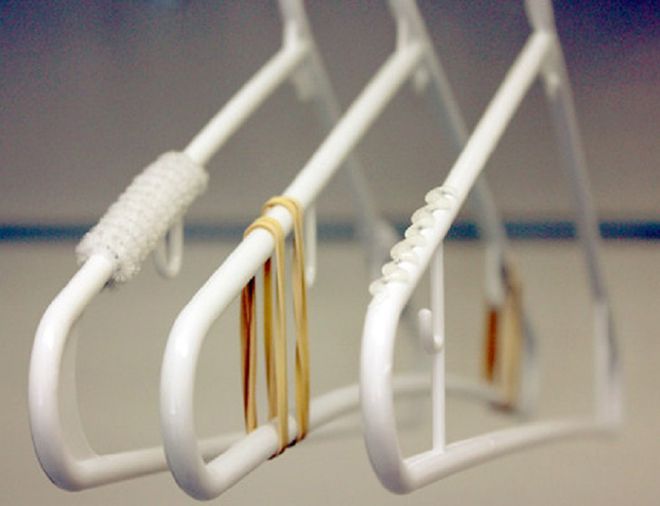 A familiar situation — they hung a dress on a coat hanger, and it treacherously falls down. It doesn’t matter, there is a life hack for this situation. It is necessary to attach an elastic band at the edges of the hanger on each side, wrapping it in several layers. 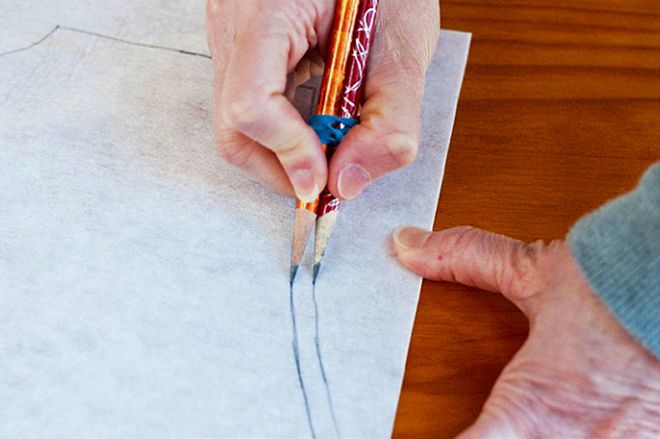 If you need to draw two lines close to each other (about 1 cm apart), for example, when making a pattern for a new dress. No need to struggle with a ruler, measuring the right size, but simply fasten two pencils together with an elastic band and draw lines at the same time. 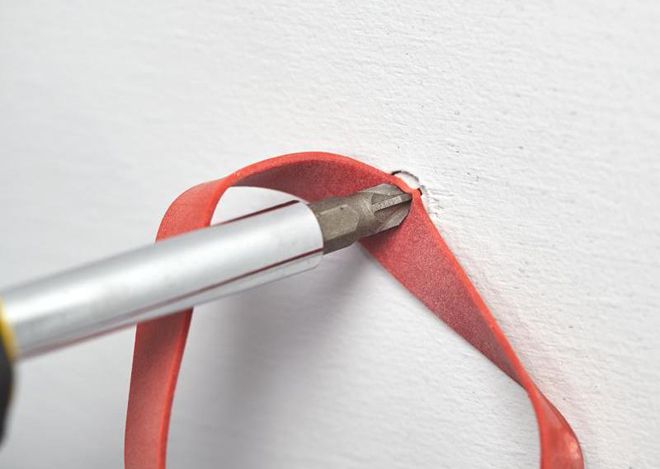 A common situation is when it is necessary to unscrew a screw on which the slots are torn off, and there is nothing to catch on with a screwdriver. The craftsmen found a way out — put a rubber band between the screw and the base of the screwdriver and the task will be completed in a matter of seconds.

7. Save paint and keep your hands clean. 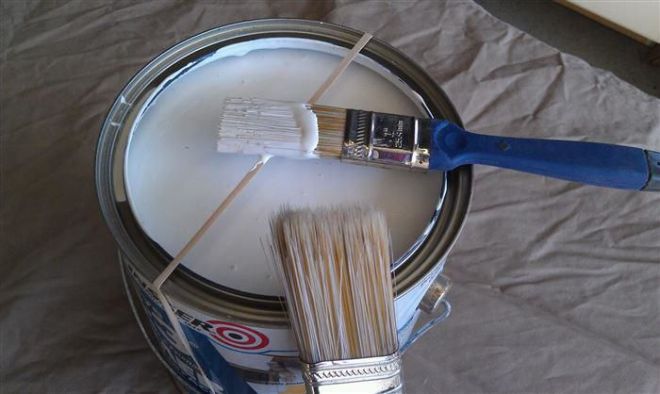 Another tip for people who are doing renovation work and need to paint something. So that the paint typed on the brush does not flow down the handle, you need to wrap it near the beginning of the pile with a rubber band. Another secret — in order not to pick up a lot of paint on the brush, make a simple limiter, for which stretch an elastic band of a suitable size across the open can. It will be very convenient to remove excess paint on it, which will fall directly into the jar.

8. We pack luggage to the maximum. 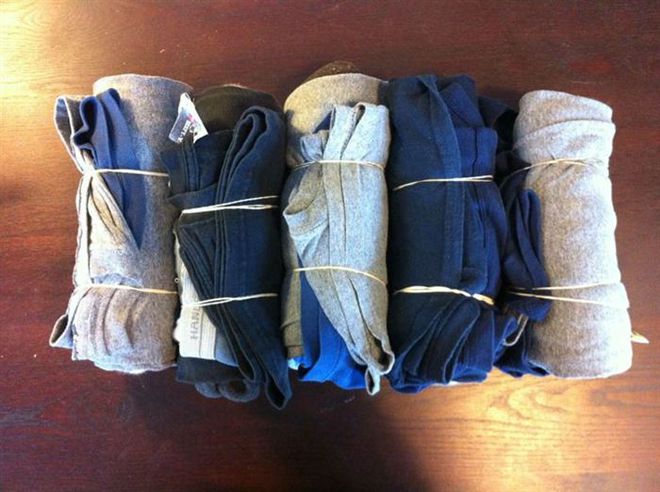 Are you going on a trip, but your suitcase is already full and you need to put a lot of things in it? Do not panic, now you will learn a simple method of how to properly pack your clothes so that they take up as little space as possible. Roll each item into tight rollers and fasten them together using a rubber band. Thanks to this secret, you will not only save space in your suitcase, but also get things that are not too wrinkled. 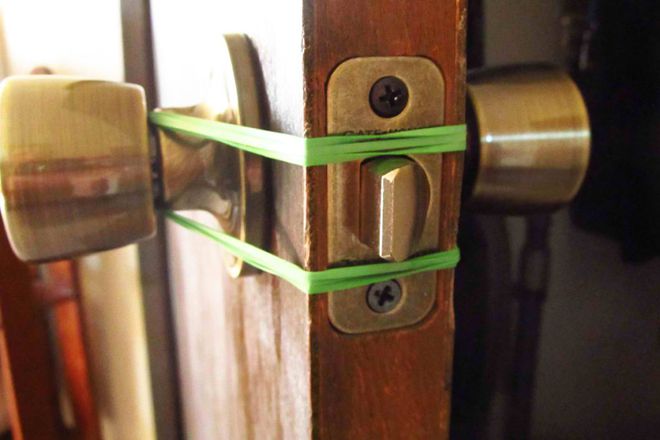 If a situation arises when you need to fix the lock tongue on the door so that it does not accidentally close, then simply pull the rubber band between the handles, twisting it crosswise. Such a simple action will help to fix the tongue in one position. 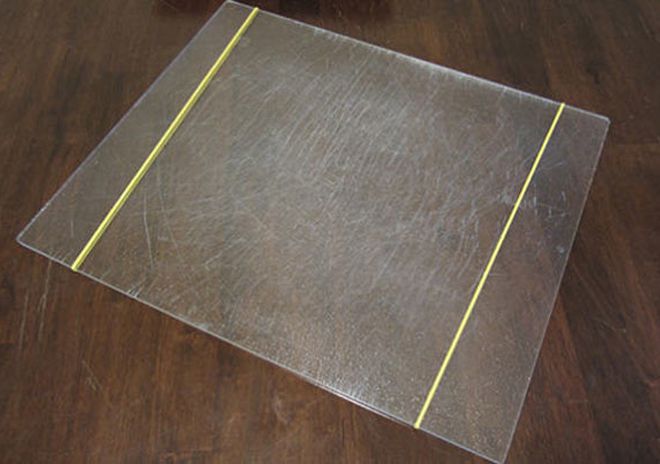 A common situation is that while cutting food, the board tries to “run away” somewhere, which complicates the process and can lead to its fall. In order to prevent this from happening, it is necessary to stretch one elastic band along the edges of the board, which will work like a brake. 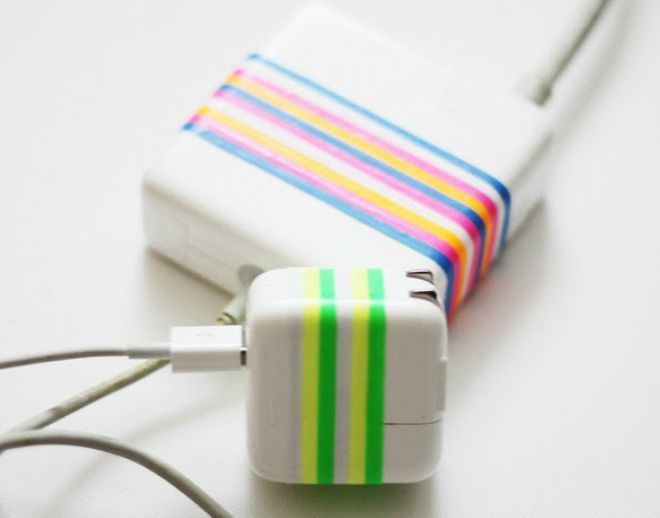 Given the large amount of technology that is used in the house today, it is not at all surprising that you often get confused about which wire and which side to insert into the connector. To solve this problem, a simple method was invented — marking with multi-colored rubber bands that are tied on the right side. 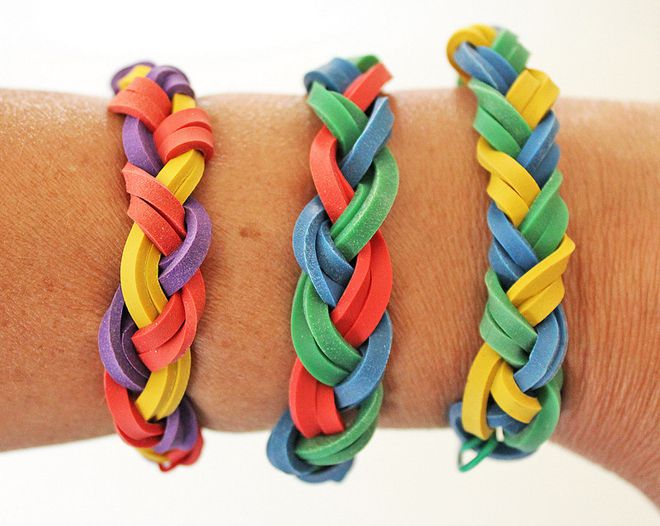 Recently, rubber bracelets have been very popular, which you can weave with your own hands using several multi-colored rubber bands. There are many interesting weaving options. 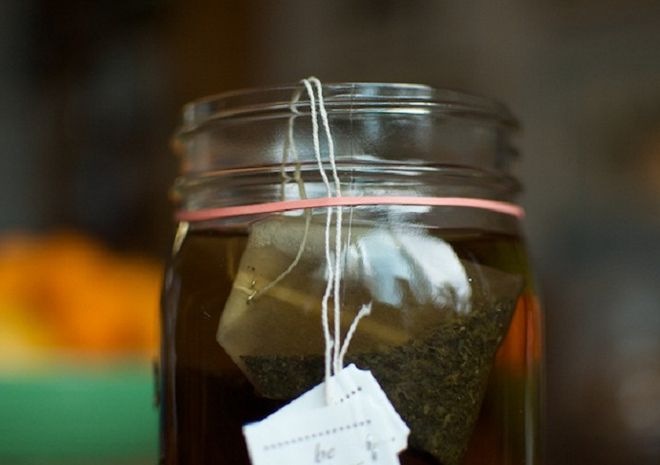 Wishing to enjoy delicious fragrant tea, you put a bag in a glass, pour boiling water, and … the thread, along with the attachment for extracting the tea leaves, ends up at the bottom, so how not to get angry here? To save your nerves and fingers from boiling water, you just need to fix the thread of the tea bag on the mug with the help of a rubber band. 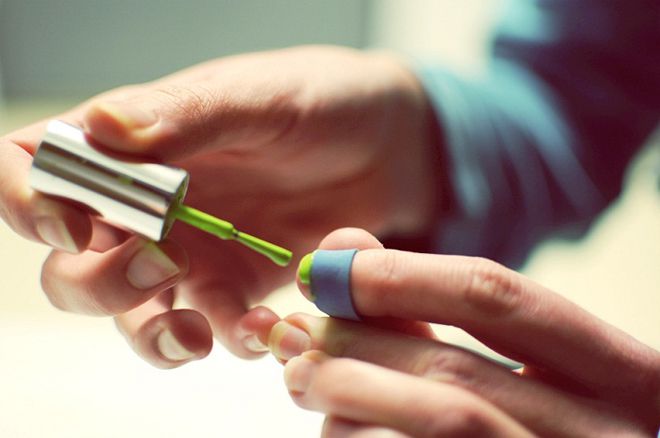 The next life hack is especially for the fair sex, who prefer to do their own manicure. In order not to constantly spend money on special strips for French manicure, use stationery gum as a limiter.

15. Gained extra pounds — not a problem. 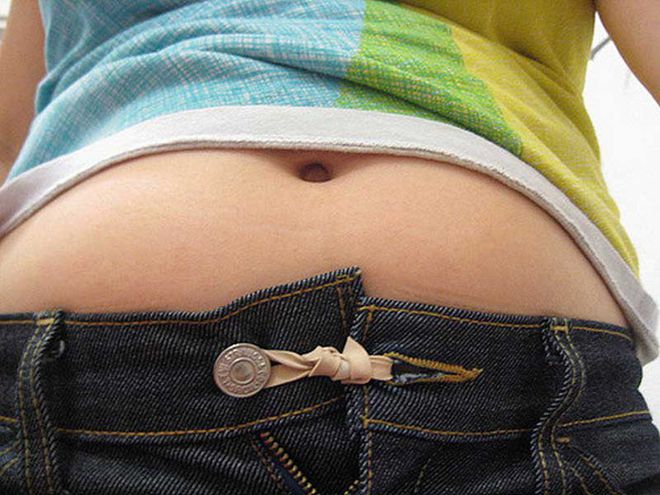 We ate cakes, ate rolls, and now — your favorite jeans cannot be buttoned up. There is a way out of this situation, use a clerical elastic band, which you need to skip and fasten into a loop, and then attach to a button. 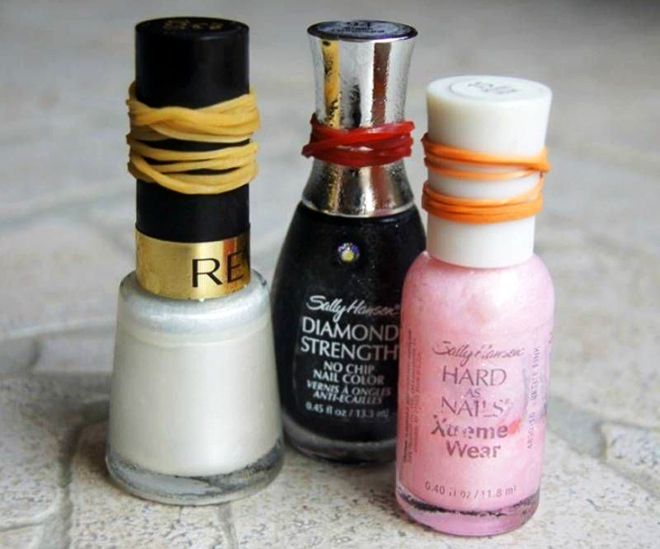 Another secret for women who have repeatedly encountered such a problem as slipping out of the cap of the varnish from the hands. This usually leads not only to damage to the manicure, but also to the contamination of clothes and other things. To correct this blunder of the designers of lacquer jars, wrap a rubber band around the cap. 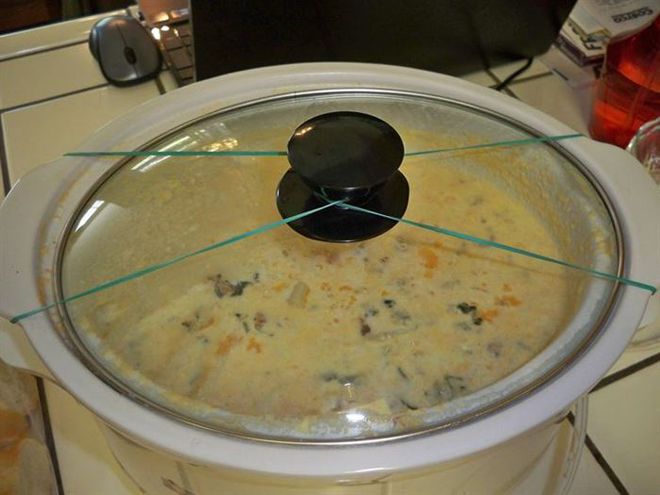 Are you planning a trip to nature or a trip to the country and have prepared a lot of food? Then the next tip is for you — so that the lid does not fall off the pan on the road, secure it using a few stationery rubber bands. Believe me, you will deliver valuable cargo in integrity and safety.