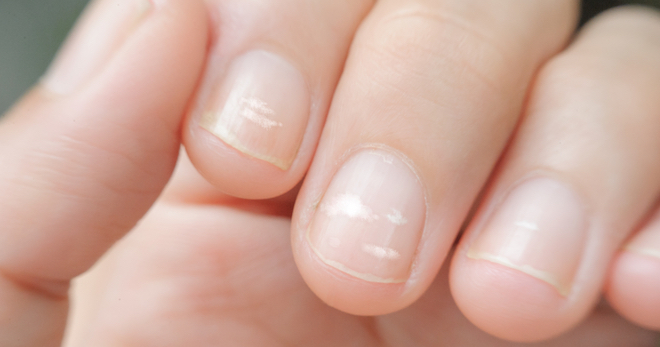 Many people had to notice white stripes on their nails, but almost no one pays serious attention to this problem. In most cases, it really is harmless, but sometimes a drawing that suddenly appears can be a signal that something is wrong with the body and it needs help.

There are several criteria that will help assess the condition of the plates and understand if they are in order. So, here’s what healthy fingernails look like:

What do white stripes on nails mean?

It just so happened that many people do not pay any attention to white stripes and spots on their nails, completely forgetting that any changes in the body are a reason to think about health. The appearance of a «pattern» on the plates science calls leukonychia. The shape and size of the strips can be anything — someone sees only small dots, while others cover almost the entire nail.

If the transverse white stripes on the nails are not very wide, the cause may be hiding in a disturbed metabolism. Sometimes these occur with infectious lesions. In older people, horizontal stripes may appear with diabetes, cirrhosis of the liver, or heart failure. Among other things, the problem is a sign of weakened immunity and disorders in the digestive system.

Longitudinal stripes on the nails are single or multiple, dull or pronounced. Often the problem appears in those people who suffer from peripheral circulatory disorders. Why do white stripes appear on the nails? The following factors contribute to this:

White stripes on the nails of the hands — causes

They can appear when exposed to the body of many different factors. The doctor can determine the exact cause. Diagnosis of the problem is usually done by onychologists or dermatologists. A preliminary diagnosis can be made independently, knowing why transverse or longitudinal stripes appear on the nails of the hands, the causes of this violation.

Horizontal drawings in most cases are caused by:

Longitudinal stripes on the nails of the hands cause slightly different factors, including:

On the lower extremities, leukonychia is formed for the same reasons as on the upper ones. In addition, white stripes on the toenails can also cause the following reasons:

Why are there white stripes and spots on the nails?

What other stripes on the nails of the hands have causes? Often they begin to appear after a poor-quality manicure or pedicure. If the plate is damaged during the procedure — physically or chemically — it may begin to become covered with a white pattern. Another likely cause is medication. In some organisms, an allergy to the composition of drugs manifests itself in just this way.

What to do if there are white stripes on the nails?

If the problem does not go away for a long time, and the number of bands only increases, it is worth taking care of your health:

If you can’t overcome leukonychia on your own, you need to contact a specialist. Doctors prescribe a course depending on the factor that caused the problem and often prescribe: